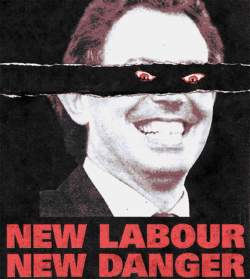 "What you do in advertising is you get your can of soup, and you hold it up to the audience and say 'It tastes great, it's full of iron, fiber and vitamins, you should buy some'. What we do in politics is hold up the other guys' can of soup and say 'It's poison, it'll kill you!'"
—Petro Georgiou, quoted on Gruen Nation

A Scare Campaign is a political advertising campaign based around the terrible things the other party or candidate will do if they get into/retain power. This is based around the idea that a voter who is on the fence is more likely to believe negative messages about one's opponent than positive messages about oneself. Studies have shown this to be one of the most effective types of political campaigns.

Naturally, political candidates will believe that many of their opponents' policies are wrong; that's why they're opponents. And in some sense, tearing down the opponent's position is just as important as building up your own. But let's face it: the vast majority of Scare Campaigns are about creating fear rather than debating. Most of them are based on wild conjecture, playing up a candidate's links to "bad people" no matter how tenuous, and sometimes just plain lies. Even when a valid point is made, expect the same creepy scary music and disturbing voiceover. This may even extend to Deliberately Monochrome techniques in the case of outrageous claims.

This trope is most popularly seen in Real Life in pure form. In fiction, a Scare Campaign will usually be played by for laughs by a goofy character, or deadly serious by a villainous one who seeks to use one to do dirty, evil things. Both of these portrayals are, naturally, based on the assumption that the audience knows the Scare Campaign is a dirty trick.

Be warned, however, of accidentally creating a Strawman Political of your own by giving Scare Campaign examples which, in themselves, amount to a Scare Campaign. For this reason, please make sure to be specific in your examples, giving direct citations when possible. This is especially important with more extreme examples. When it comes to politics, a simple "I am not making this up" just won't do.

Outside of the realm of politics, this is known as Fear Uncertainty And Doubt- generally kept to business-to-business companies, it sees Established Company X spend more time telling you how Startup Company Y's similar product will make you lose money/customers/extremities rather than how their own products will make you money/customers/extremities.

See Also: Attack of the Political Ad, for fictional parodies and exaggerations.

Examples of Scare Campaign include:

Johnson: These are the stakes! To make a world in which all of God's children can live, or to go into the dark. We must either love each other, or we must die.
Announcer: Vote for President Johnson on November 3. The stakes are too high for you to stay home.

"If we make the wrong choice [electing Kerry], then the danger is that we'll get hit again [as in 9/11] -- that we'll be hit in a way that will be devastating from the standpoint of the United States."
—Dick Cheney, 2004

"However they put it, the Democrat (sic) approach in Iraq comes down to this: The terrorists win and America loses"
—George W. Bush, October 30, 2006

"And Barack and Hillary have made their intentions clear regarding Iraq and the war on terror. They would retreat and declare defeat. And the consequence of that would be devastating. It would mean attacks on America, launched from safe havens that make Afghanistan under the Taliban look like child's play. About this, I have no doubt."
—Mitt Romney, February 7, 2008

"Our opponent ... is someone who sees America, it seems, as being so imperfect, imperfect enough, that he's palling around with terrorists who would target their own country. This is not a man who sees America as you see America and as I see America."
—Sarah Palin, October 2008