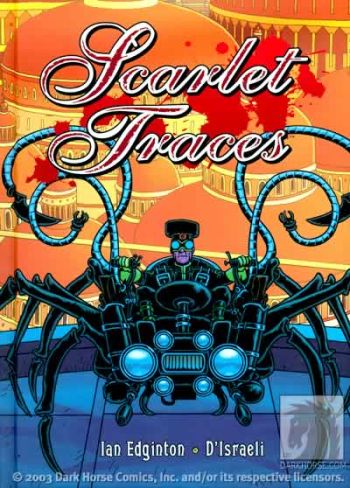 Written by Ian Edginton and D'Israeli, Scarlet Traces is the story of a post-Martian invasion Great Britain. The first story (after a fairly faithful graphic novel rendition of the original War of the Worlds) is told roughly a decade after the invasion, and follows the exploits of former soldier, spy, and adventurer Robert Autumn and his valet Archibald Currie. Basically a Alternate History continuation of the novel by H.G. Wells, the series deals with the Crapsack World that they live in, and the mystery they have to solve, which involves the highest levels of British government. The second story takes place years later, with an elderly Autumn recruiting photojournalist Charlotte Hemming to travel to Mars, and find out why so few servicemen have returned from war...

Tropes used in Scarlet Traces include:
Retrieved from "https://allthetropes.org/w/index.php?title=Scarlet_Traces&oldid=1598905"
Categories: