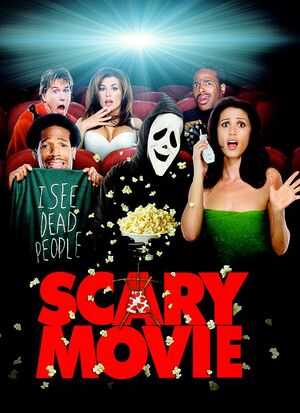 No mercy. No shame. No sequel.

This movie series pastiches horror film tropes in the vein of Airplane! and The Naked Gun (whose ZAZ team was in charge of the third and fourth movies). The first movie was mainly a parody of the first Scream, although it also heavily spoofed I Know What You Did Last Summer and took jabs at various other films, and not necessarily just from the horror genre. Depressingly, the writers seemed to miss the irony of parodying the first Scream movie, which was that it was itself a parody of the Slasher Genre; just not one in particular.

Despite the promises of no sequels, a second movie was released under the tagline "We Lied", which mainly spoofed the 1999 remakes of The Haunting and The House On Haunted Hill.

The third movie combined the storylines of Signs and The Ring, while it had a subplot spoofing 8 Mile.

The "fourth and final chapter of the trilogy" mainly parodied The Village, The Grudge and |The War of the Worlds while also incorporating a bit of Saw.

Unfortunately, this film's success is largely to blame for the later careers of Seltzer and Friedberg, who had been part of the writing team on the original film [1] and proceeded to co-opt the idea with more and more puerile iterations of it in different genres.

On a happier note, it also launched the career of Anna Faris.

Tropes used in Scary Movie include:

Retrieved from "https://allthetropes.org/w/index.php?title=Scary_Movie&oldid=1511395"
Categories:
Cookies help us deliver our services. By using our services, you agree to our use of cookies.