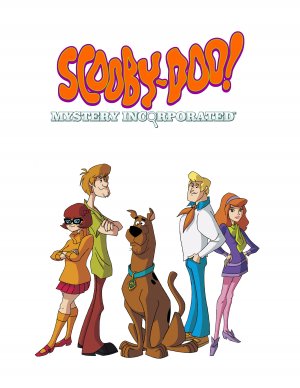 The good old gang, a little different from how you may remember them.

The show is a notable spin on the universe, as it takes elements from nearly all that came before it, most strongly from the original series, while adding a somewhat edgier, more modern spin, with what you might call more ironic humor, as well as an on-going plotline. The show is aimed at an older audience than usual, and its general feel is more mature than the Scooby Universe usually gets, with lots of lampshade hangings, and ironic and sometimes darker humor -- in general, having fun with the conventions of the franchise. The show is also more scarier and violent compared to previous shows, yet it still got a TV-Y7 rating!

After Scooby and friends solve many mysteries around their home of Crystal Cove[1], the town, whose thriving tourist industry is, as it turns out, based on the supernatural, decides it's had enough of them debunking prospective tourist attractions and cracks down on the Scooby gang's mystery solving. It doesn't work. Hilarity Ensues.

No one, not overbearing parents, nor a obnoxiously obstructive sheriff, nor a mayor who's more interested in tourism than solving crimes (and is also an overbearing parent), nor the mysterious Mr. E and the supposed curse of Crystal Cove, can stop Mystery Inc.!

Now has a recap page.

Tropes used in Scooby-Doo! Mystery Incorporated include:
Retrieved from "https://allthetropes.org/w/index.php?title=Scooby-Doo!_Mystery_Incorporated&oldid=1932077"
Categories:
Cookies help us deliver our services. By using our services, you agree to our use of cookies.