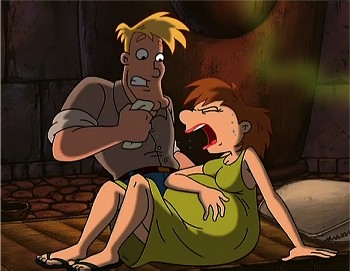 Miles discovers that his services as breathing coach may not be as in demand as he thought.

When a character is pregnant in a series, especially a sitcom, there will be the inevitable Screaming Birth.

Commonly, TV birth happens mere minutes after the water breaks, precipitating a mad rush (in a taxi) to the hospital, frantic calls to the doctor, and apoplexy (or better yet, a nice dramatic swoon) by the father-to-be. And for some reason, nobody ever decides to take an epidural.

The rest of the episode is spent with the pregnant character lying flat on her back (the hardest conventional position in which to give birth, but the easiest for doctors and cameras), in pain, sweating, crying, cursing out her husband/boyfriend/babydaddy ("You did this to me!"), or screaming his name if he's not there, and eventually pushing a kid out of her crotch with all attendant drama. This ends with a damp but otherwise perfectly clean (three-month old) baby being held by an exhausted but beatifically smiling mother and an ecstatic father or father-figure. (Just don't expect to see the delivery of the afterbirth, or the stitching-up of any perineal tears, either of which would no doubt spoil the mood.) You will occasionally see the cutting of the umbilical cord by the nervous father, always obscured from direct sight and often Played for Laughs.

The chances are good that the mother will be unable to make it to the hospital and will deliver anywhere she might find herself (note: Never take the elevator if you will be riding with a pregnant woman or are near-term yourself). Can be combined with Locked in a Freezer, where the pregnant woman is the "danger" and the other characters have to help her give birth.

Since the 1970s this is usually preceded by a Lamaze Class earlier in the season.

In Real Life, Screaming Births do happen, especially when there are complications, but it's often a self-fulfilling prophecy if a woman tenses up in anticipation. In any event, it generally isn't the birth, which is almost always the shortest part of the process, that is painful, and is done without medication at any rate. The painful part is the labor that precedes it, which can last anywhere from two hours to three days. And depending on too many factors to mention, can be extremely painful, not to mention that if it looks as though it is going to be very long, drugs can help a woman get rest and possibly sleep, rather than be awake for 36 hours before having to give birth.

Examples of Screaming Birth include: