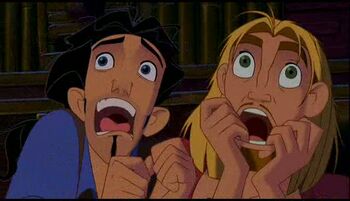 Given the situation, you'd be screaming like that too...

As a tough masculine fighter, you never cry, never wince at a hit, and talk in a manly baritone. But it's amazing how a Groin Attack, little needle, or garter snake can make your voice rise four octaves into a three-year-old's scream. It seems inherently funny to see this grown man emit a girly scream. This trope is usually played for laughs, as it is hard to take the image of a man who Screams Like a Little Girl seriously. This is sometimes associated with a Camp Gay or the Non-Action Guy character.

Comedy-based logic dictates that the more butch the guy is, or the more he runs his mouth about being tough, or the lesser the actual danger is, the funnier it is when he screams like a girl.

Retrieved from "https://allthetropes.org/w/index.php?title=Screams_Like_a_Little_Girl&oldid=1917268"
Categories:
Cookies help us deliver our services. By using our services, you agree to our use of cookies.