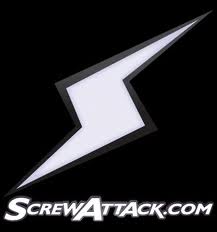 ScrewAttack, officially known as ScrewAttack Entertainment LLC, is a video game-related Web site that showcases original entertainment for an audience of video game enthusiasts. Its content is also shown on GameTrailers.com and IGN. The name and logo come from the "ScrewAttack" ability from the Metroid series. Their fanbase is affectionally called "g1s", based in part of an old radio term.

They've even developed their own iPhone game, The Texting Of The Bread, an obvious parody of Typing of the Dead.