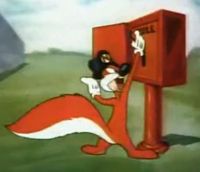 The Trope Namer, currently summoning a dog to chase him so he can beat him senseless for chasing him.

A protagonist who mercilessly pranks characters primarily for his own (and the audience's) amusement. This is sometimes over a minor slight where the character is annoyed that the perpetrator doesn't even acknowledge it. Often the product of a disturbed animator, the character's pranks are sometimes of the Dude, Not Funny category.

Many writers of original animated shorts felt it was more difficult to sympathize with an obviously clever lead doing this kind of thing too often. A famous comparison is the early "Tex Avery style" Bugs Bunny, who was zany on sheer principle (or better yet, Bob Clampett's take on Bugs, which portrayed him as a manic, short tempered egotist who breaks down when met with someone of his own wile). Chuck Jones turned Bugs into a Karmic Trickster. He was paired with bombastic or life-threatening antagonists who deliberately threaten or mistreat him without provocation. Given that he responds only in retaliation or in self-defence, Bugs was more easily excused for his behavior, and even then he tended to play on the stupidity of his enemies rather than outright aggression. A problem with this moral logic of the encounter was that it is always incredibly one-sided, since Bugs is obviously almost never at any real risk. It shades into Why Did You Make Me Hit You?.

On the bright side, this kind of character will rarely, if ever, cause any permanent or serious damage to their victims, mainly due to the downtoning of this trope. Modern examples of this trope will usually result in a Jerk with a Heart of Gold, who, while causing other characters a lot of annoyance, at least can manage to notice when they have gone too far even for them. They are trying to amuse themselves, after all, and some levels can flat out be disturbing even to them. Writers also frequently took pleasure in showing the odd occasion where such pranksters to have absolutely no sense of humor when it is they who act as the butt of a joke, often leading to a Humiliation Conga. If they have a favorite victim, on the other hand, they will usually be very protective of them should another similar-minded prankster show up and do the same on them, reasoning that it is only he or she is allowed to treat the victim in such a manner, which often leads up to a Hypocritical Heartwarming moment.

If the Screwy Squirrel is an otherworldly being, the character may also be an Amusing Alien or a Great Gazoo.

Media Watchdogs for Saturday Morning Cartoons in the 1980s came down heavily on any remaining Screwy Squirrels, citing them as bad influences on children; many revivals of them tend to be toned down considerably.

Not to be confused with Crazy Awesome or Nutty Squirrel (for actual squirrels).

Examples of Screwy Squirrel include:

Retrieved from "https://allthetropes.org/w/index.php?title=Screwy_Squirrel&oldid=1931950"
Categories:
Cookies help us deliver our services. By using our services, you agree to our use of cookies.