Sealed Evil in a Duel 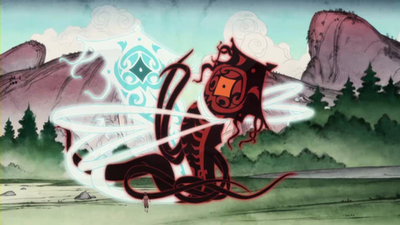 Sometimes, the Big Bad is just too darned evil to be Sealed in a Can. Perhaps he already was, and it didn't work. After hammering him time and again, our hero eventually realizes that It's Up to Him, and carries out the Heroic Sacrifice Worse than Death: Trapping themselves in a duel with the bad guy for all eternity, thus effectively "sealing" their opponent with themselves as the plug.

If they aren't strong enough, the baddy will escape, possibly using its would-be impediment as a Soul Jar.

This can also be used as a Backstory, with the release of the Big Bad also releasing the original hero.

May invoke Someone Has to Do It. On the other hand, sometimes only their conscience is keeping them on the job.

Sister trope to Hell Is War. See also Kill Us Both; often overlaps with Enemy Without and Tailor-Made Prison. The furthest possible extension of How Much More Can He Take?. Might be the ultimate duty of a Barrier Maiden.

Examples of Sealed Evil in a Duel include:

The motivation seems slightly different; as the above quote shows, Richter doesn't want to do this to trap Dracula (vs. letting him free); he wants to do this to continue the fight (vs. the fight being over).

Retrieved from "https://allthetropes.org/w/index.php?title=Sealed_Evil_in_a_Duel&oldid=1610881"
Categories:
Cookies help us deliver our services. By using our services, you agree to our use of cookies.