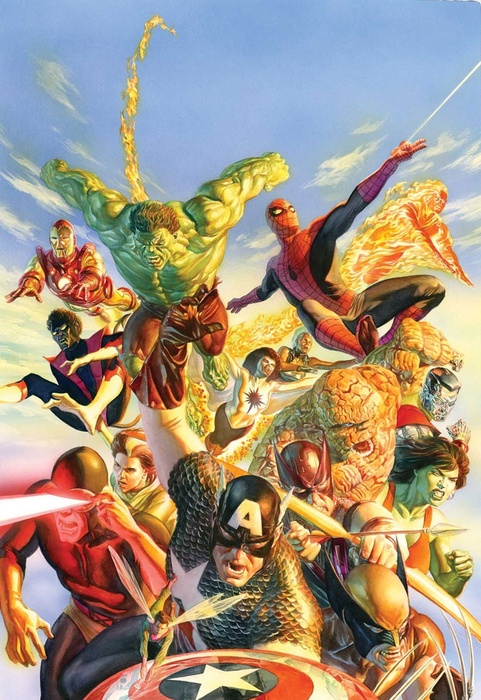 Secret Wars was a twelve-issue comic book Crisis Crossover limited series published from May 1984 to April 1985 by Marvel Comics.

Originally envisioned to promote a new line of action figures, the series featured a huge war between the greatest heroes and villains of the Marvel Universe. And Bulldozer.

An omnipotent Cosmic Entity by the name of The Beyonder, fascinated by the presence of superheroes on Earth and their potential, chooses groups of both heroes and supervillains and teleports them against their will to "Battleworld", a planet created by him in a distant galaxy, stocked with alien weapons, technology and mismatched parts from different worlds. He tells them to kill each other, and, to the victor, his greatest desire will be granted. His purpose is to understand the (to him) alien concept of "desire".

The heroes include the Fantastic Four (minus Sue Storm, who was pregnant at the time), The Mighty Thor, the Jim Rhodes version of Iron Man, the Monica Rambeau version of Captain Marvel, She Hulk, Spider-Man, The Incredible Hulk, Hawkeye, Captain America (comics) and The Wasp, with the second Spider Woman (Julia Carpenter) showing up several issues in (in her first appearance). Members of the X-Men (Professor X, Cyclops, Storm, Colossus, Wolverine, Nightcrawler, Rogue, and Lockheed The Dragon) split off from the main heroic team and act as a separate faction for much of the book. Magneto, buffing up his Anti-Villain credentials, also does his own thing for awhile before joining with his fellow mutants.

Villains include Doctor Doom, Doctor Octopus, Klaw, Ultron, The Lizard, The Wrecking Crew, The Enchantress, Kang The Conqueror, Molecule Man, The Absorbing Man, and new villains Titania and Volcana. Galactus The Planet Eater is also there acting as his own non-allied entity.

So, as you might guess, new friends are made, old alliances are tested, complicated intrigues are formulated, and in the end, everyone gets home without anyone dying, though Spidey gets a shiny new black costume inspired by Spider Woman's (which would later become the Venom symbiote), She Hulk replaces The Thing in the Fantastic Four (who stays behind after he finds he can revert to human form on the Battleworld), Volcana hooks up with Molecule Man, and Colossus gets Strangled by the Red String to an alien healer, causing him to break up with Kitty Pryde. The toy line sold poorly, but the comics sold well, and the whole thing was continued the next year in Secret Wars II in which the Beyonder came to Earth and tried becoming human. This series was seen by some as a Self-Insert Fic by Jim Shooter (writer of both series and current Editor in Chief of Marvel at the time.)

The Beyonder got retconned into a delusional lesser cosmic being, not really omnipotent (still more powerful than Earth's heroes, however) in a Fantastic Four story years later, in what was apparently a Take That at Shooter. Steve Englehart, FF writer at the time, reported that this was editorial interference.

There was a miniseries in the 2000s titled "Secret War" but it had nothing to do with the first two. Instead, it was about superspy Nick Fury getting some heroes to help him track the source of supervillain technology (which turned out to be Doctor Doom), and ended with Fury being removed as leader of SHIELD for acting without permission.

There was also a miniseries entitled "Beyond!" in which the events of the first series seemed to be playing all over again, with a reduced cast of heroes and villains. It was finally revealed not to be the Beyonder, but The Stranger pretending for "research purposes".

A pared down version of the first Secret Wars was adapted for Spider-Man: The Animated Series, reducing the number of characters involved and making Spider-Man the leader of the forces of good rather than Captain America. It was well-received and is considered one of the greatest episode arcs of the show.

Tropes used in Secret Wars include:
Retrieved from "https://allthetropes.org/w/index.php?title=Secret_Wars&oldid=1924753"
Categories:
Cookies help us deliver our services. By using our services, you agree to our use of cookies.