The Secret of Monkey Island

Everything About Fiction You Never Wanted to Know.
(Redirected from Secret of Monkey Island)
Jump to navigation Jump to search 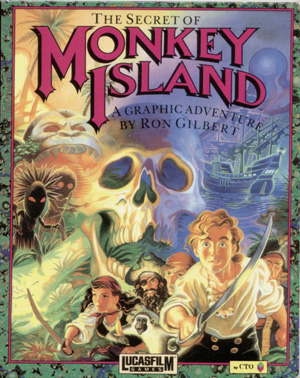 The first game in the Monkey Island series, The Secret of Monkey Island was released in 1990. The game begins as our hero Guybrush Threepwood finds himself on Mêlée Island™, with one clear objective on his mind: becoming a Mighty Pirate™. To become one, he must first pass "The Three Trials", and while doing so, he learns of Elaine Marley, the local governor, and her story with the notorious ghost pirate LeChuck, who now terrorizes the waters around Mêlée Island™ together with his undead crew. After passing the trials, Guybrush finds out Elaine have been kidnapped by LeChuck, and he must now set sail for LeChuck's lair which lies on the titular Monkey Island in order to save her.

Way later in 2009, LucasArts got back in the Adventure Game business (finally redeeming themselves in the eyes of adventure fans) by remaking the game, complete with voice acting by the cast of The Curse of Monkey Island.

Tropes used in The Secret of Monkey Island include:
Retrieved from "https://allthetropes.org/w/index.php?title=The_Secret_of_Monkey_Island&oldid=1813616"
Categories: