See the Whites of Their Eyes 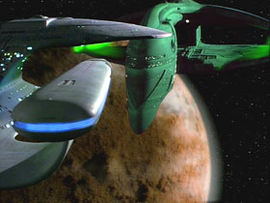 Picard had them right where he wanted them.

"Drive me closer! I want to hit them with my sword!"
—Commisar Fuklaw, Dawn of War [1]

Although not exclusively, this presents a particular problem for armed spacegoing vessels, where the loss of this rather useful bit of technology invariably leads to confrontations and battles against other vessels at near-point-blank range. And God help you if your opponent is packing an Invisibility Cloak. This has also led to a common starship design configuration where most of the ship's weaponry is placed broadside-style along the flanks of the ship's superstructure. It has also brought about the need for super-advanced, highly technological warlike civilizations to engage in Old School Dogfighting.

Named after the supposed famous quote of Col. William Prescott in the battle of Bunker Hill: "Don't fire 'til you see the whites of their eyes!" This was justified at the time because they were using notoriously inaccurate 18th-century muskets and they had almost no ammunition, so every bullet had to count. In reality, the command was routinely given to soldiers in many battles: no army had very accurate guns or unlimited ball and powder—or arrows, for that matter. The saying is famed, and associated with Bunker Hill, by Americans because it was the first battle of the nascent American nation.

Not to be confused with Eye Lights Out or By the Lights of Their Eyes, for literal eye lights.

There are four discernible reasons for this phenomenon:

When the phrase is used, is often changed to reflect the enemy. For instance, in Transformers, it's "the wires of their optics".

Examples of See the Whites of Their Eyes include:

While employing proton torpedoes against fighters is seen as overkill by some pilots, within Rogue Squadron using such a tactic was always seen as an expedient way of lowering the odds against us-odds that were usually longer than a Hutt and decidedly more ugly.

Contrary to what you might see in an episode of Attack Run, starships in combat seldom approach to within point blank range of one another, exchanging fire at distances of hundreds, if not thousands, of kilometres.

Maxim 22: If you can see the whites of their eyes, somebody's done something wrong.