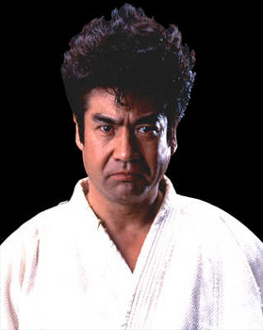 Segata Sanshiro (pictured) was a fictional character created by Sega in the 1990s to be the Japanese spokesman for the Sega Saturn console. Hiroshi Fujioka played the titular character in TV commercials.

In the ads, Segata Sanshiro was a crazed martial artist who beat the living crap out of kids for not playing Sega Saturn (and again singing his own theme song {well, part of it} later released as a single that sold over 100,000 copies). It can be argued that his presence in Sega's Japanese commercials was singlehandedly responsible for the continued existence of Sega in the console market (at least up to the Sega Dreamcast).

His last commercial consisted of him bravely sacrificing himself to ensure the Dreamcast's release, and his exploits were immortalized in Sega's last first-party Saturn game Segata Sanshiro Shinkenyugi.

A collection of the commercials can be found here.

Today, he comes again
He will punish those who do not play seriously
Their battered bodies will never forget!