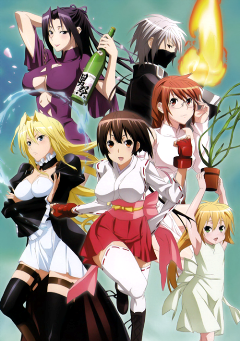 Boobies for the Win!

Minato Sahashi is an Ordinary College Student, even though he's failed his entrance exams twice. As he's walking down the street, he suddenly finds a Magical Girlfriend falling from the sky and crashing into him. She is Musubi, one of 108 beings known as Sekirei, about to be engaged in a Battle Royale across Tokyo, headed by the mysterious MBI organization. With a kiss, Minato "wings" Musubi and becomes her Ashikabi, or master, for the battle royale. The Sekirei Plan begins.

Based on the manga by Sakurako Gokurakuin (yes, believe it or not the artist is a woman), Sekirei was turned into a Twelve-Episode Anime in summer 2008 by Seven Arcs. A second season, Sekirei: Pure Engagement, aired in summer 2010.

Tropes used in Sekirei include:
Retrieved from "https://allthetropes.org/w/index.php?title=Sekirei&oldid=1878107"
Categories:
Cookies help us deliver our services. By using our services, you agree to our use of cookies.