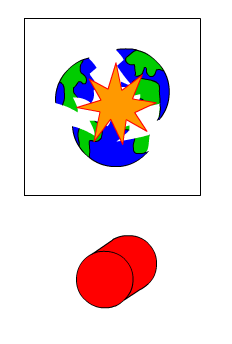 Go ahead. Press it.

Any relatively simple (compared to the scope of the result) device or process which can cause the complete destruction of a building, spaceship, planet, empire, Weapon of Mass Destruction, etc. Effectively an Achilles' Heel for non-living things. The Evil Overlord seems particularly fond of this trope, frequently installing it in almost all of his ships, buildings and other whatnot, even when there is no obvious reason why such things need an integrated self-destruct system when a non-explosive instant shutdown mechanism will suffice.

Though usually activated by a Big Red Button, some Self Destruct Mechanisms require two (or even three) people to enter codes, turn keys or push buttons simultaneously, etc. The latter sort almost always comes with a countdown (or even a Magic Countdown) until it actually goes off. All of this fussing about builds suspense and also allows the Self Destruct process to be halted once set in motion.

Sometimes the heroes change their minds, or they weren't the ones who started the countdown. Depending on the situation, the off switch may be uncooperative (or there may not be an off switch); this often results in a Wire Dilemma. Other times it's simply a question of getting back to where the switch is. Either way, it is Always Close.

In the real world, scuttling a large ship is a complicated process involving detonating explosive charges at various points on the superstructure - for obvious reasons, these charges are not in place and armed at all times, but are usually placed just before the fact if it becomes necessary to destroy a ship. Persons working with sensitive equipment are often provided with a more practical "self-destruct mechanism" to use if capture is a possibility - a large hammer, fire axe, or other heavy implement used to smash the equipment and thus stop its being reverse-engineered.

Real world self destructs do exist, such as special microwave ovens for destroying integrated circuits, electrically self-frying storage media, and self erasing disks are used in many intelligence situations; in all cases "won't smoke excessively, no toxic smoke, won't damage the vehicle or occupants" are pretty hard and fast contractual requirements.

Marginally more forgivable in the case of advanced spaceships; the Kzinti Lesson, "A reaction drive's efficiency as a weapon is in direct proportion to its efficiency as a drive", can be made to apply just as well to the ship itself as to other ships.

Examples of Self-Destruct Mechanism include: