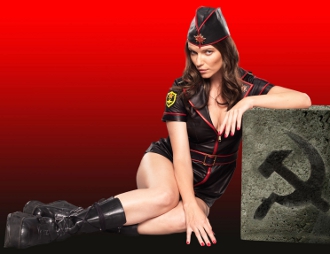 Women from Central and Eastern Europe tend to be sultry Femme Fatales, Pole dancers, or both.

The Femme Fatale version arose in the UK during the Cold War. Tales abounded of the glamorous, alluring Russian woman who would throw herself at a visiting British businessman, seducing him into wild, unrestrained sex acts. Later, after he'd returned home to their families, the businessman would learn that the tryst had been filmed and that pictures would go to his wife and to the government if he didn't comply with whatever demands the blackmailers made - and that the sexy vixen he'd bedded was a full colonel in the KGB.

In comparison, in North America during the Cold War this trope practically did not exist (unless the woman was going to do a High Heel Face Turn). Russian women were considered to be the ugliest humans in existence - "deformed monsters" wouldn't be putting it too strongly. Ryan Stiles's comment ("Russia! Our women look like men!") might be understating the point. Johnny Carson wasn't the only comedian to base entire sets on the purported hideousness of all Russian women, but he was the most famous - and hundreds of comedians copied him. Even today, many older North Americans are shocked by pictures of attractive Russian women because they'd heard for forty years that all Russian women were ugly and masculine-looking. It was a nasty, cruel stereotype, but one almost universal in the Cold War era.

No real life examples, please; this is a trope about how characters are depicted in media. Also note that the personality and function of the character in the story matters. A Slavic character that is good-looking does not automatically count; a Slavic character that uses her sex appeal to seduce, manipulate, distract or beguile a main character does count.

Examples of Sensual Slavs include:

Retrieved from "https://allthetropes.org/w/index.php?title=Sensual_Slavs&oldid=1903495"
Categories:
Cookies help us deliver our services. By using our services, you agree to our use of cookies.