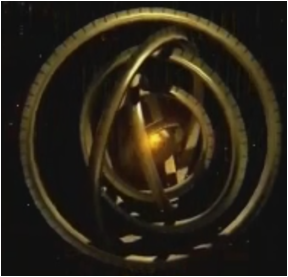 Septerra Core: Legacy of the Creator takes place on possibly the strangest planet in the history of fiction, right after Discworld. The center of the planet is the immense biocomputer Core, and seven sets of continents, called World Shells, are orbiting around it, each above another. Shell Seven is closest to the Core, and the radiation levels turned everything into Mutants. Shell Six is ruled by Pirate Robots. Shell Five is home to two technologically advanced and eternally warring countries. Shell Four is home to the World Bazaar, with all the requisite thieves, smugglers and hookers. Shell Three is the closest thing to Heroic Fantasy you can find in this world. Shell Two is a big desert whose inhabitants survive by scavenging the garbage dropped on their homes by the Chosen, egotistical noblemen from Shell One. Best place for a holiday ever, yes?

According to the mythology, Septerra was built by the Creator, who placed a mysterious artifact in the center of the Core, that would grant the user ultimate power. Gemma, God of Evil, stole the keys to the Core and kidnapped Kyra, angel of light, whom he wanted to become his wife/sex slave (he's a god of evil, is there any difference?). The Creator sent his son Marduk to save the day and give this punk a lesson. Marduk gathered an army of people from each Shell, took two demon swords, found Gemma (with little help from Trickster Dogo) and after a hundred day battle, trounced him and threw him into the Pits of Janak. Descendants of Marduk and his Army of the Seven Winds became the Chosen. According to the prophecy, millennia later the world would be in great danger and the keys will be used to save it.

Chosen Lord Doskias, a direct descendant of Marduk and total Jerkass, believes the time has come and he is the Messiah. He plans to save the world, whether the world wants it or not. Maya, the main character, accidentally discovers part of his insane plan, and decides to stop him. And the journey begins.

This PC game is currently available on Good Old Games.

Tropes used in Septerra Core include:
Retrieved from "https://allthetropes.org/w/index.php?title=Septerra_Core&oldid=1697630"
Categories:
Cookies help us deliver our services. By using our services, you agree to our use of cookies.