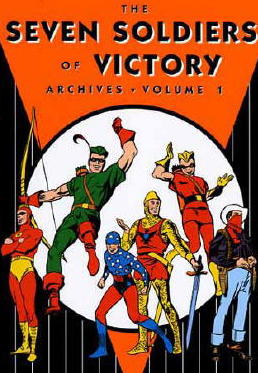 The unsung Seven Soldiers of Victory... Stripesy and Wing are off fighting for the last slot.

In the history of the DC Universe, the first superhero team was the Justice Society of America. And the second was the Seven Soldiers of Victory. Much like the Justice Society, the Seven Soldiers were heroes from several DC anthology comics. They were made up of Vigilante, The Crimson Avenger (his sidekick Wing was on the team, but wasn't a member proper), The Star-Spangled Kid and his adult sidekick Stripesy, Green Arrow and Speedy, and the Shining Knight. Appearing in 1941, they had a great many adventures, but eventually died fighting their greatest enemy, The Nebula Man, who was created by their arch-foe, the Iron Hand...

Years later in the 1970s, during the celebration of the 100th meeting of the Justice League of America (i.e. the 100th issue), the League is summoned to Earth-Two by the JSA in order to help them combat a giant ethereal hand, created by the Iron Hand. Because of the similarities between the hand and the Nebula Man, it was concluded that the team who defeated the Nebula Man would be needed, but it was discovered that in the Soldiers' final battle, they were apparently erased from existence since no one could remember who they were. The JSA and JLA then summoned a mysterious Oracle (who would later be revealed as Aurakles, the 'first superhero') for help. The Oracle revealed that following the defeat of the Nebula Man, the eight heroes were scattered in time, although one had died in the battle. As the JSA and JLA recovered the Soldiers and helped them build a new Nebula Rod, it was revealed that the fallen hero, The Unknown Soldier of Victory, was Wing, who had to sacrifice himself to defeat the Nebula Man. Knowing that whoever used the Nebula Rod would have to die, the android hero, Red Tornado, stole the rod and used it to destroy the hand, but was destroyed in the process.

Then the Crisis on Infinite Earths happened. Post-Crisis, the Soldiers still existed, more or less. Because the original team were all Golden Age heroes, their history had to be changed: Green Arrow and Speedy were never on the team, Vigilante's sidekick Stuff the Chinatown Kid was officially a member and Vigilante's mentor Billy Gunn was present but was never a member, and the final member was an archer called Alias The Spider. The Spider was really a villain working with the Iron Hand and sabotaged the Nebula Rod, killed Billy Gunn and attempted to kill Wing. The Soldiers still succeeded, Wing died, the Soldiers were scattered through time (Vigilante, however, was found after he spent twenty years in the Old West).

There never was a second Seven Soldiers team, made up of Batgirl, Blackhawk, Metamorpho, Mento, Deadman, Adam Strange, and a new Shining Knight who gathered together only once.... That team only met up in an Elseworlds story. The true successors of the Seven Soldiers of Victory 'formed' much more recently, about one week before the events of Infinite Crisis. 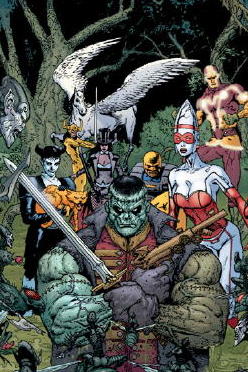 Their teamwork focuses less on the "team" and more on the "work" part.

The "Seven Soldiers" maxi-series, written by Grant Morrison, started in 2005 and ended in 2006. With two bookend issues, the bulk of the series was comprised of seven four issue miniseries, each one focusing on each one of the titular seven members. This series is notable in that none of the members of the team ever meet each other (with one exception).

The series starts with the son of the original Spider, Thomas Dalt AKA "I, Spyder", visiting Slaughter Swamp outside of Gotham City, and encountering the "Seven Unknown Men of Slaughter Swamp" who have chosen him for a certain task. Meanwhile, an about to retire Greg Saunders AKA Vigilante (who was later revealed to be finally submitting to his werewolfism) creates a new Seven Soldiers of Victory team, made up of Spyder, a new Boy Blue, Merry the Gimmick Girl (called Gimmix), Dyno-Mite Dan, and the Whip to defeat a giant spider that was supposed to have been destroyed during Saunders' tenure in the old West. The team kill the spider, but in turn are decimated by the mysterious Sheeda, lead by the Nebula Man, who have come to destroy the world in "The Harrowing".

Each of the miniseries focuses on each member:

Tropes used in Seven Soldiers include:
Retrieved from "https://allthetropes.org/w/index.php?title=Seven_Soldiers&oldid=1349824"
Categories:
Cookies help us deliver our services. By using our services, you agree to our use of cookies.