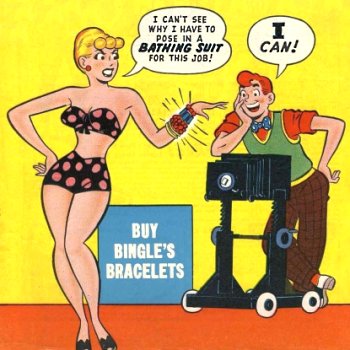 It's to sell both swimsuits and bracelets. Right?

Here's a question for you. Say you have a new product or an old product in new packaging. You want to sell a lot of it and you want to sell it quickly. How? Do you describe it exactly how it is on the tin? Do you try to compare to other products? No way. Just think about it: you want people to buy what you sell. People buy what they like. People like sex. So you should equate what you sell with sex! Easy as pie...served by bikini-clad models.

When you can use a sexy image on an advertisement to sell the product, there's no need to make any effort to tie-in the product to said image. The sex exists as an attention grabber; something that invokes a Pavlovian response which associates the product with sex. Advertisers and audiences alike can generally agree that sex sells, despite (or perhaps because!) most places make it illegal to actually sell sex.

And yet, some studies suggest that sex doesn't sell; people remember the advertisement quite vividly afterwards, but at the expense of forgetting the product.

A Super-Trope to Sexy Packaging, Sex for Product, Lady Not-Appearing-In-This-Game.

Examples of Sex Sells include:

Oh, so that's why Aeros are so bubbly and delicious.
Hrm?
You know, like he just said.
He was speaking?

Bearlial: Are you sure that your "coworkers" are baristas? These sound like stripper names to me.

42. Not allowed to attempt to appeal to mankind's baser instincts in recruitment posters.

-Voiceover: "Catholicism! We've made a few...changes."

Loud Howard: (about the commercial) I'VE ONLY SEEN IT ONE TIME, AND ALREADY I WANT TO DATE THAT MODEL AND SUFFER HEAD TRAMUA!