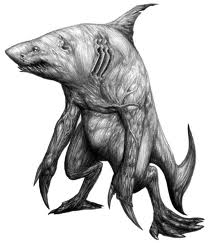 It's common knowledge that Everything's Even Worse with Sharks. Out of all the sea creatures, none sets in man a Primal Fear quite like a shark does. But what if you want something scarier than a shark? How could we possibly make so fearsome a beast even scarier? Why, by giving him legs, arms, and a human brain! Thus we have the Shark Man. It may be a Half-Human Hybrid. It may be a natural mutation on a shark, or a human Super Soldier with shark like enhancements. All that matters is it packs the bestial parts of a shark with the form of a human. Could probably apply with any large sea predator.

Examples of Shark Man include:

Retrieved from "https://allthetropes.org/w/index.php?title=Shark_Man&oldid=1811144"
Categories:
Cookies help us deliver our services. By using our services, you agree to our use of cookies.