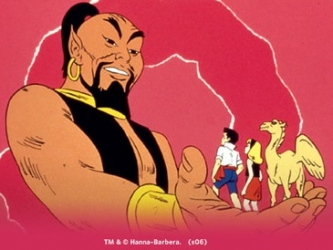 Shazzan! was a cartoon created by Alex Toth and produced by the Hanna-Barbera company for CBS back in 1967. It featured a giant genie named Shazzan who served two American kids, a boy named Chuck and his sister, Nancy, who had found a pair of magical rings in a cave and were transported to a Magic World that resembled the one from the Arabian Nights tales. Each of the kids had one of the rings that, when touched to each other (and the word "Shazzan!" is spoken) summons the genie to grant their wishes -- anything except being sent home; they were required to find Shazzan's true owner first (with no clues provided, even by Shazzan himself). The genie also gifted them with an Invisibility Cloak, a bag of dust that can create illusions, and a magic rope. The series followed the two (and their winged camel, Kaboobie) as they traveled this strange world, helping those in need along the way.

The show was, as was typical for cartoons of the time, very formulaic: Every episode, the kids would reach a new land, where some villain was up to no good; after being threatened, they finally put their rings together, after which Shazzan appeared and quickly disposed of the villains (while mocking them). Alex Toth, the series' creator, later said, "It was a conceptual problem. The genie had no weaknesses; once you summoned him, the episode was over."

Also as typical of the time, there was no "final episode", so we never got to see the resolution of the plot.

Not to be confused with Shazam or even less with Kazaam.

Tropes used in Shazzan include:
Retrieved from "https://allthetropes.org/w/index.php?title=Shazzan&oldid=1751795"
Categories:
Cookies help us deliver our services. By using our services, you agree to our use of cookies.