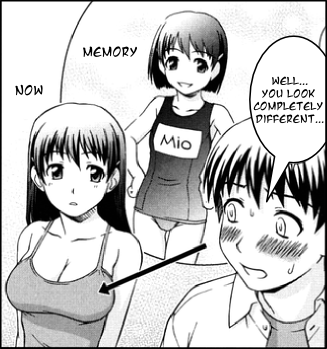 “I distinctly remember you not having a nose.”

So the hero hasn't seen this childhood friend in a long time. Then they meet again, and holy crow, she's stunning. He realizes that his friend that he never thought of “that way” really can be thought of “that way,” usually as she starts dating someone else. If he gets her in the end, it will invariably be revealed that she had been in love with him all along; she just needed a new hairstyle and contacts for him to finally notice her.

A variant of this: the first story part, they're so-so to okay looking. Cue the sequel, and BAM! knockout. There are various reasons for this; sometimes the character was too young to be thought of “that way” in the first part. In live action shows and movies, this can happen to a character when puberty hits the actor or actress like a Colony Drop.

This is Truth in Television for many girls in their early teens, though it's not often addressed in TV or movies, which almost universally portray girls as absolutely ecstatic about their physical changes and the (male) attention it gets them. Apparently in fiction-land a girl isn't allowed to want to be anything but sexy once they hit their teens, but then again there's a reason for that. Unfortunately.

In-Universe examples only. Although the audience can definitely feel this way about a character, this trope only applies if the character's change is acknowledged in some way by another character.

Contrast with Lolicon, and I Was Quite a Looker. This can sometimes lead to First Girl Wins. Sometimes overlaps with She Cleans Up Nicely.

Examples of She's All Grown Up include:

Retrieved from "https://allthetropes.org/w/index.php?title=She%27s_All_Grown_Up&oldid=1947263"
Categories:
Cookies help us deliver our services. By using our services, you agree to our use of cookies.