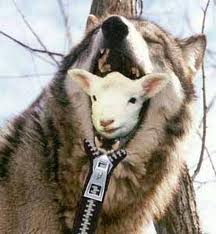 Looks good on you, kid.

A guileful hero can often avoid unnecessary fighting by disguising himself as a Trojan Prisoner, walking into an enemy base and planting explosives, rescuing the princess and laughing on the way home as the base blows up.

However, some enemies can't be fooled by first rate acting and good costuming. Some, like zombies, virus infected or robots, can instantly tell others of their kind on sight, smell, sound, taste, touch, Aura, or WiFi. Anyone attempting to traipse by through a throng of them will quickly be found out and eaten. There is one catch to this "foolproof", friend-or-foe recognition though. Basically, it assumes everyone who is one of their kind has the same agenda and interests, and when you go about infecting, robotizing, or metamorphosizing normal humans to your side, at least one of them is going to slip through the cracks, avoid or reject the Hive Queen's influence, and refuse to sell out humanity and become a Pro-Human Transhuman.

These Sheep In Wolf's Clothing use their early stage zombification/monsterhood to slip by enemy hordes and help their still-human allies however they can. This is usually a Heroic Sacrifice for a number a reasons: firstly, these Doomed Protagonists know the change is irreversible, and he or she will either die outright from the infection or suffer Loss of Identity once it finishes. Some heroes may infect themselves voluntarily to avoid detection, especially if the enemy is so well defended that only a suicide mission can end their threat.

If he succeeds, the hero can have one of three ultimate fates: become a monster and die (hopefully after succeeding in his mission), become a monster and live (which usually leads to What Have I Become?, but might not be so bad) or become human again thanks to a miracle antidote or No Ontological Inertia on the transformation.

Surprisingly not connected to A Wolf in Sheep's Clothing.

Examples of Sheep in Wolf's Clothing include:

Retrieved from "https://allthetropes.org/w/index.php?title=Sheep_in_Wolf%27s_Clothing&oldid=1608960"
Categories:
Cookies help us deliver our services. By using our services, you agree to our use of cookies.