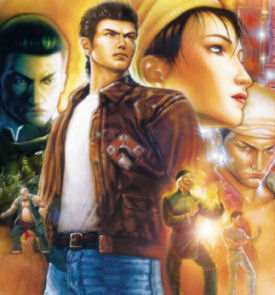 Shenmue is a game developed by Sega-AM2, released in 1999 for the Sega Dreamcast. A sequel, Shenmue II, was later released in 2001 also for the Dreamcast and then later for the Xbox. Shenmue was originally meant to have more titles ranging from 4-7 over which the complicated story would be told, yet due to disappointing sales, Sega's withdrawal from the console market and the high production costs needed to make Shenmue games fans had to make do with only two games.

Essentially a 3D adventure game, the first installment placed the protagonist in a rather small town with complete freedom, and the second had him in a truly massive sprawling city to explore. The series made use of a weather system which as the name implies would change the weather; some days it'll rain, others it'll snow, or it'll be bright and sunny or cloudy and overcast. The days would pass and the seasons would change; if the player really wanted to, he could wait until spring (the game is set during winter). All the NPCs (each with a unique desgin) had their own lives too; in many other games, characters would simply walk in a certain pattern or stand there all day, while in Shenmue people came out of their houses around 9am, went shopping, chatted with their friends, headed to the bar at night and then walked home. If it was raining they had raincoats, and add to this that the characters had more than one stock phrase all voiced in English (in the first game; the second game had Japanese voice overs and English subs - until the Xbox port)!

The game probably also popularized the Quick Time Event. Shenmue made it big (Dragon's Lair did it first), and on top of that, in most QTEs, if you didn't press the button in time, the story would keep going just slightly differently. There were also random encounters with people, conversations, fights and the like, so no people ever played the same game. Also, the player could play Yu Suzuki's earlier games in a video game, could collect little toys, and he could even look after a small kitten... basically, anything the player wanted to do within the world. In the second game, Ryo could gamble, take part in fights, and get part time jobs to get money.

Of course, Shenmue wasn't all about walking around asking people about the day the snow turned to rain and if they had seen a black car; there was fighting too. Based of the Virtua Fighter engine, Ryo would enter a free fight where he would either fight a group of people or one worthy opponent. You could learn new moves, and practice them to become more powerful.

The game's story begins when Iwao Hazuki is killed by the Lan Di after refusing to give up the location of the Dragon Mirror (a mysterious jade engraved item). Ryo, Iwao's son and the player's character, goes out on a quest to get revenge on Lan Di. As it turns out, Lan Di is part of a very powerful crime organization, the Chiyoumen, and has connections with the Mad Angels, a group of bikers that hang around in the docks of Yokozuka. Ryo meets up with Master Chen who then reveals there is a second mirror which Lan Di is also looking for, the Phoenix Mirror, which just happens to be hidden under the dojo in Ryo's house. After finding the mirror, Ryo then proceeds to beat up the Mad Angels and learns that Lan Di headed towards Hong Kong. The first game ends with Ryo getting on a boat to Hong Kong.

The second game attempts to cram much more of the story in, clear in the knowledge they wouldn't release as many games as planned. Ryo ends up in Hong Kong and searches for Master Lishao Tao, the only link left to Lan Di. On his search, he meets and befriends gang leader Ren and sexy martial arts expert Xiuying. He learns that the Chiyoumen have connections in Kowloon with the crime organization Yellowheads. After defeating the massive army of gang members and fighting his way all the way to the top of their headquarters (with help from Ren), he defeats Dou Niu, just in time to see Lan Di fly off in a helicopter. The last section of the game takes place in Guilin where Ryo meets the very important character Ling Shenhua who leads Ryo to the place where the jade for the mirrors was mined. The second and currently last game leaves us with many unanswered questions and a cliffhanger.

Tropes used in Shenmue include:
Retrieved from "https://allthetropes.org/w/index.php?title=Shenmue&oldid=1679531"
Categories:
Cookies help us deliver our services. By using our services, you agree to our use of cookies.