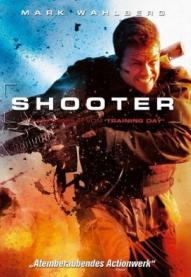 Shooter is a 2007 film directed by Antoine Fuqua, featuring Mark Wahlberg as Bob Lee Swagger, an ex-marine sniper who was disillusioned with the government after he was left behind enemy lines during a mission, only escaping on his own terms. It is based on the 1993 novel Point of Impact by Stephen Hunter, although it does deviate from the source material in several parts.

Yet because he is the best at what he does, he is recruited by the government to help track down a potential sniper, only to become the scapegoat as part of a Government Conspiracy. Swagger goes on the run but knows he has to fight back, recruiting rookie FBI agent Nick Memphis to investigate. What they find reveals new details about the mission where Bob was trapped behind enemy lines.

Meanwhile, the widow of Bob's sniper partner is also dragged into the events, and Bob has to save her, though she is not a traditional Damsel in Distress either.

Shooter enjoyed moderate box office success and some critical acclaim. In its genre, it is a conspiracy thriller, and rides on the paranoia of the Bush years. It also owes a lot to The Bourne Series (including the general resemblance between Wahlberg and Matt Damon), although the sniper angle and being rated R works in seperating itself from other Follow the Leader types.

Tropes used in Shooter include:

In addition to many of the above tropes, Point of Impact provides examples of: