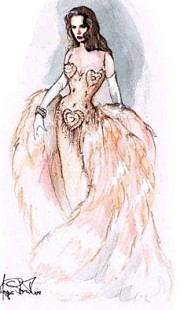 Good thing that skirt covers the most important parts.

This is a skirt that wraps only partly around a lady's waist, thus making a crescent instead of a full circle.

While a regular skirt is designed to cover up the legs, and slit and wrap skirts cover the legs unless the lady moves right, this kind of skirt doesn't really cover the legs (unless you look at it from the right angle). The point is actually to frame and showcase the legs.

It should also be noted this trope could work with a simple dress or a Pimped-Out Dress.

Florenz Zeigfeld is probably partially responsible for developing this style with his Zeigfeld Follies showgirls "glorifying the American girl" from the late 19th C and early 20th C.

The key to telling if a skirt like this is to look at the waist. The skirt has to wrap between 1/3 to 3/4 of the way around the waist to count. Anything less or more doesn't count (like Leia's slave girl outfit).

Usually a Sub-Trope of Impractically Fancy Outfit, and almost always a kind of Fan Service.

Examples of Showgirl Skirt include: