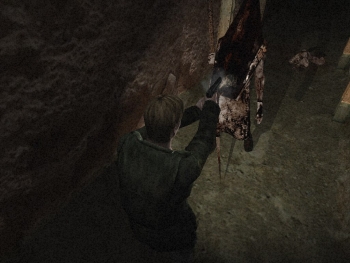 He's certainly not there to show James the exit.

In my restless dreams, I see that town.
Silent Hill.
You promised you'd take me there again someday,
But you never did.
Well I'm alone there now...
In our "special place"...
Waiting for you...

Numerous fans and critics hold Silent Hill 2, the second game in Konami's Silent Hill franchise, in very high regard: they consider it the franchise's apex, and as such, it holds a place on a number of critics' "greatest games" lists.

One day, a man called James Sunderland receives a letter from his wife Mary asking him to meet her in their "special place" in Silent Hill, a resort town they visited together once on vacation. The problem is that Mary is dead.

Despite knowing that it is impossible for Mary to be alive, James travels to Silent Hill to discover who wrote the letter and the reason they sent it, arriving into a seemingly-abandoned town shrouded in a perpetual fog. During his exploration of Silent Hill, he meets several people: Angela, a disturbed runaway; Eddie, a psychopathic slob; Laura, a young girl who seems to know Mary and bears a grudge against James; and Maria, a stripper with a remarkable resemblance to Mary who begs James to protect her.

James soon discovers that his journey through Silent Hill is a very personal one, as he is forced to confront his own fears, vices and guilt. A number of increasingly symbolic monsters oppose him at every turn, most notably the Pyramid Head, a muscular butcher in a pyramid-shaped helmet who rapes and assaults his fellow monsters and murders Maria over and over.

Silent Hill 2 features Multiple Endings based on James' general behaviour throughout the story rather than specific choices at certain junctions.

Silent Hill offers up these tropes; they're waiting for you:

"Do you know what it does to you, James? When you’re hated, picked on, spit on, just 'cause of the way you look? After you’ve been laughed at your whole friggin’ life?"

The door that wakes in darkness, opening into nightmares.