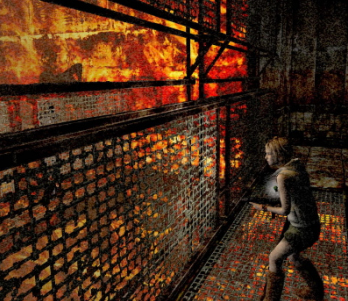 One girl versus a mad, mad world.

Heather, a seventeen-year-old girl, is walking through a typical suburban mall when she is approached by a shady detective called Douglas, who wants to talk to her about her past. Heather shuns Douglas as a stalker and tries to slip away from him, but suddenly finds herself trapped within a hellish otherworld populated by grotesque monsters.

Heather struggles to return home and make sense of what is happening to her, stalked by the mysterious otherworld that seems to corrode her surroundings wherever she goes. During this she is "helped" by two people: Claudia Wolf, a strange girl who urges Heather to "remember who she really is"; and Vincent, an enigmatic preacher with an agenda of his own.

Whereas SH1's otherworld was based on hospital trauma and SH2's on guilt and lust, SH3 (loosely) preys on typical teenage fears such as unwanted pregnancy -- and like previous games, SH3's story and mood embrace a theme related to these fears (in this case, helplessness). There are also several forms of symbolism related to rape -- and the fear of rape -- which make more sense when players discover Heather's status as the unwilling carrier of the fetus of the cult's God.

Tropes used in Silent Hill 3 include:

Retrieved from "https://allthetropes.org/w/index.php?title=Silent_Hill_3&oldid=1881841"
Categories:
Cookies help us deliver our services. By using our services, you agree to our use of cookies.