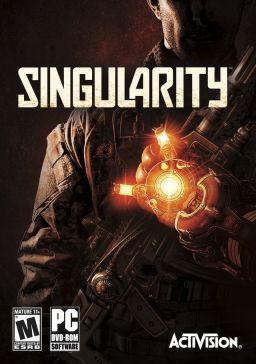 It is 1950. Facing the power of the atomic bomb, still solely controlled by the United States of America, the USSR starts looking for their own super weapon. On a small island, named Katorga-12, off the eastern coast of the Soviet Union, a strange new element is discovered, containing immense power. Named E99, an entire facility is constructed in secret to develop this unique resource, and give Stalin the power to conquer the world.

This does not go well.

In 1955, a disaster devastates the entire island. The experiment, the island, and the facility are buried by the Soviet government, scrubbed from files and hidden from the world.

Flash forward to 2010. A US Marine recon patrol, in response to strange radiation readings from the supposedly non-existent island, heads to investigate. After a sudden flash of light, the patrol helicopter crashes...

In Singularity, you play Captain Nate Renko, who quickly discovers that the island is much more than it appears. The space-time continuum is in constant flux. The 1950s bleed into 2010. The timeline is quickly disrupted, forming a mess of interchanging pasts and presents. Horrific mutants and monsters, the Soviet army of the past and present, and the environment itself are out to kill him. It is only the power of the TMD, an experimental device used to manipulate the time state of objects or people, and the help of a mysterious woman and her old mentor, that allows Renko to survive, and slowly unwind the truth behind the island's mysteries.

Tropes used in Singularity include:
Retrieved from "https://allthetropes.org/w/index.php?title=Singularity&oldid=1766895"
Categories: