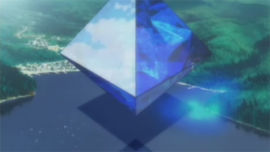 Ramiel: 1d8 times as powerful as any other Angel.

Large geometric artifacts are unnerving. They are unfamiliar and inhumanly perfect. Visual artists use these common reactions to convey a sense of the unknown and the sinister.

Humans do not build perfect spherical vehicles or any other large mathematically perfect geometrically shaped device. Such devices seem more than foreign: they seem not of this world.

The lack of visual cues is another source of fear. A giant cube in space does not look like a spaceship; it could be anything. It could be a massive bomb, or a toy, or a probe. Consider the monolith from 2001: A Space Odyssey: it is the ultimate unknown.

This feeds into the reputation for evil that accompanies aliens that have geometric bodies, large or small.

There are exceptions. Very large Ringworld style objects are geometric for merely physical reasons. The same is generally true of recognisable space stations and large regular spaces such as hollowed asteroids.

Summary: if your aliens are cute as Care Bears, omens be fair. Picometer perfect polyhedrons? Beware.