Everything About Fiction You Never Wanted to Know.
(Redirected from Sink or Swim Mentor)
Jump to navigation Jump to search 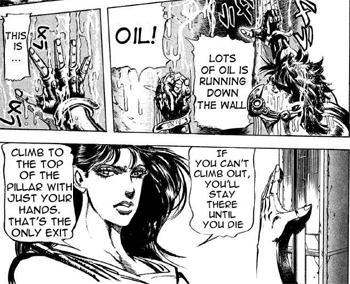 She also doubles as a Sexy Mentor.

The good news? There's no Training from Hell with this guy. The bad news? That's because there's no training at all with this guy, at least, not before you've already survived a pretty critical situation.

The Sink or Swim Mentor is a bit of a Social Darwinist: the strong survive, so it's best to cull the weak as quickly as possible. So instead of training a student for any length of time, this mentor throws them in at the deep end, where his own life - or that of others - depends on his success.

Well, maybe that's a bit extreme. This character can exist in any type of setting, and it's unlikely that an accountant or receptionist would have lives depending on them. They might walk in the door only to be thrown an important project though, and be warned that a major client is relying on its completion.

This mentor is definitely at his most dramatic when lives are on the line though. He hands the hero the tools of the trade, be it a sword, a scalpel or a gun, and tells him to get on with it. Often this mentor is such a cool character that it isn't until Fridge Logic kicks in that the viewer thinks "Wait a minute...if the mentor's that good, why didn't he just save those people himself rather than sending a teenager to do it?"

Occasionally justified in that the main character needs to be able to cope in that kind of situation in order to progress with his vocation; a dragon slayer who needs constant instructions is going to be turned into a kebab before he can say "Now what?" Sometimes, though, it seems as if the mentor is just stoking his own ego, forcing his student to prove themselves "worthy" of their tuition. Generally, however, a benevolent mentor will remain close by during the test-crisis, ready to assist when the students get in over their heads (but not a second before). If they're really feeling generous, the mentor will craft their own realistic crisis simulation so that the students can be tested without any undue risk (naturally, the student will be unaware of that detail until the end).

Usually, after the initial crisis is resolved, the real training begins.

Sometimes overlaps with being a Trickster Mentor or a Fair Weather Mentor. In the case of the latter, chances are that the poor student won't last long. He'll be tested so constantly that he's bound to fail at some point, in which case he'll be disowned. Their reliance on testing their student secretly means that a Stealth Mentor can easily be mistaken for one of these, until they reveal that they haven't just been throwing them to the wolves. See Also, Die or Fly.

Examples of Sink-or-Swim Mentor include:

Retrieved from "https://allthetropes.org/w/index.php?title=Sink-or-Swim_Mentor&oldid=1671100"
Categories:
Cookies help us deliver our services. By using our services, you agree to our use of cookies.