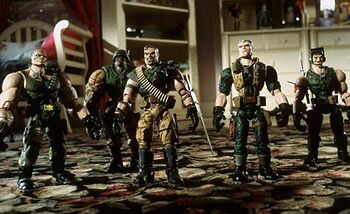 Bringing militant action figures to life with a thirst for blood? There's an app for that.

Everything else is just a toy.

Small Soldiers is a 1998 action/comedy film directed by Joe Dante, best known for his work on the Gremlins franchise. It focuses upon the Heartland Toy Company, a conglomerate that gets swallowed up by GloboTech Industries, an organization that deals in high-tech military hardware. The members of the board of Heartland deduce that implanting military AI chips into their newest set of action figures would grant kids a more interactive experience; however in doing so, manage to grant the two lines (the Commando Elite and their enemies, the Gorgonites) literal intelligence. The Gorgonites have a pacifist mindset while the Commandos are basically of the warmongering variety, who will stop at nothing to destroy the Gorgonite scum, and anyone who allies with them. Their battle takes place in Suburbia, where young Alan Abernathy (Gregory Smith) befriends the Gorgonites due to his being left in charge of his father's toy shop, and he vows to help them achieve their goal before the Commando Elite can find and take them apart. He gets help from his neighbor and love interest Christy Fimple (Kirsten Dunst).

The film was a modest box office hit, earning $54,682,547 in the United States market. It was only the 42nd most successful film of its year but more than covered its budget. It received mixed reviews. Some critics enjoyed the "smart satirical" plot and the Shout Outs to numerous pop culture elements. Others felt that it put too much emphasis on the special effects and too little on character development. Both Gregory Smith and Kirsten Dunst were nominated for Young Artist Awards and lost. Smith lost to Miko Hughles of Mercury Rising. Dunst lost to Lindsay Lohan of The Parent Trap.

The robotic characters consisted of:

Tropes used in Small Soldiers include:

Irwin: What if this kid's telling the truth? We can't have toys out on the market that may be dangerous.
Larry: [lackadaisical] How can they be dangerous? Everything on them is standard. The design is standard, the materials are standard... the mechanicals are standard. Even the... [sudden Oh Crap face] Oh.
Irwin: What's "Oh"?
Larry: What?
Irwin: You just said "Oh".
Larry: No, I said "Oh!"
Irwin: You mean "Oh" like, "That's interesting" or "Oh" like, "We're screwed"?
Larry: No. I mean, "Hey! Whoa! Oh!". Look, forget the "Oh". l'll go to legal to start on the countersuit.
Irwin: The chips! That's the "Oh"!

Punch-It: We fixed him!
Slamfist: We tried to fix him...