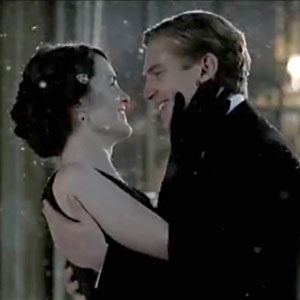 A Crowning Moment of Heartwarming if ever there was one.

Come with me, dance, my dear
Winter's so cold this year
And you are so warm


My wintertime love to be
—The Doors, "Wintertime Love"

A classic clichéd romantic setting is two lovers alone in a gentle snowfall. Bonus Points if it's on Christmas.

A person alone is cause for sympathy, however. Especially a sad girl in snow.

See also Snowed In and Together Umbrella. A subtrope of Empathic Environment.

For a different interpretation of snow, see Snow Means Death.

Examples of Snow Means Love include:

Hermione: Do you want to get closer?
Ron: Huh?!
Hermione: To the Shrieking Shack?
Ron: No, I'm good.