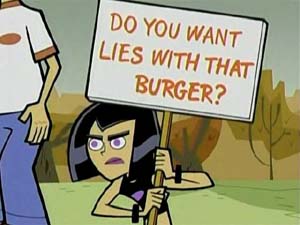 What exactly is she protesting? It doesn't really matter.

A child or teenager, almost Always Female, who cares deeply about all worthy causes. She wants to protect the environment from polluters, prove that women can be as good as men, and Free the Frogs. She is often the main character of the show, and spends a lot of time struggling with her idealism and whether it is too unrealistic.

Soap Box Sadie is usually a post-hippie, the sort of woman who would have been a hippie had she not been born in the wrong decade. And if it weren't for the fact that she's (usually) the heroine on a children's show and absolutely cannot be shown using drugs or engaging in "free love".

In most shows, she exists to teach children an Anvilicious lesson about the importance of the environment, feminism, and standing up for one's beliefs. If so, it is 100% guaranteed that at least one episode will teach her a Broken Aesop about how she shouldn't force her beliefs on others, completely contradicting every other episode of the show plus giving no regard to anyone else's unreasonable actions. (Yes, 100% guaranteed—there are no exceptions. If you haven't seen it happen in your favorite show yet, give it time.)

If she's not the main character, Soap Box Sadie is often the main character's best friend or a family member, played for laughs. She's always right, but because she's so self-righteous, the main character can ignore her without being punished by the Powers That Be. Note also that being always right within the show's parameters can easily turn her into a powerful irritant, and if she was seriously intended to be a mouthpiece for the writers, this often backfires rather spectacularly.

A variant is the angry, self-righteous activist Goth, who is much less likely to be a soapbox for the writers.

Examples of Soapbox Sadie include:

Retrieved from "https://allthetropes.org/w/index.php?title=Soapbox_Sadie&oldid=1545145"
Categories:
Cookies help us deliver our services. By using our services, you agree to our use of cookies.