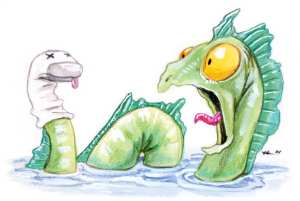 A secondary, pseudonymous online identity created by an individual in order to give the impression that there are multiple people who agree with a given point, idea or action, when in reality there's only one. Sock puppets are usually used to post follow-ups that praise their owner or echo his convictions, in the hopes that they will convince real people to pay attention to him and/or his agenda. While the first Sock Puppets appeared on UseNet, they have long since spread to other electronic venues, most notably blogs.

Sock puppeteers are not limited to individuals, though. Numerous groups—political, commercial, religious and atheistic—have attempted to manipulate public opinion on the Net using false identities that purported to be "real" people. And multiple Sock Puppets are a necessary part of any Astroturf campaign. Fortunately, they tend to be fairly heavy-handed and reasonably obvious to most people.

The term is a long-standing one in electronic media, dating back to the early days of the Net in the 1980s. It originated on UseNet and is still seen there, especially in the anti-spam groups. The term itself comes from the practice of creating a cheap puppet by pulling a sock over your hand, and then pretending to talk to it. One sub-category of the sock puppet is the "concern troll", in which a sock puppet pretends to be part of a faction but makes "concerned" derogatory comparisons to another faction for whom the troll is a sock puppet. Another variety is The Shill.

This is one of the more popular "Internet Argument Techniques." very common in forums and mainly used by trolls this can be a source of frustration to users trying to have an honest debate. Can also be a source of laughs not only for the trolls and others in on the ruse, but for other users following the argument. Once discovered this is commonly used as another point against the user and/or another way to discredit their arguments.[1]

Sock puppets are banned in many online venues. Wikipedia is notoriously plagued with them; its "anyone can edit" philosophy makes it hard to keep them out, while its bureaucratic processes provide incentives for their creation. They're also the bane of every site which accepts consumer "reviews" or opinions of individual products; Wikivoyage refers to these folks as touts.

In commerce, the counterparts to a "sock puppet" would be the "straw person" nominee director and the "shell corporation". It looks to be a different company on paper, but one person holds the puppet strings.

See also Astroturf and the second definition of Meat Puppet. Not to be confused with an actual constructed puppet made from a sock.

Examples of Sock Puppet include: