Some Kind of Force Field 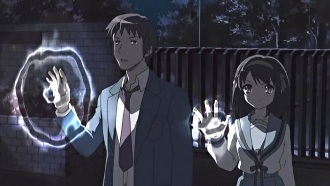 Because of the Rule of Perception, whenever a character walks into an invisible force field, expect a brief flash of the field and a light-sabery crackle. The trope name is the Stock Phrase that often results, in an odd aversion of Not Using the Z Word.

Using Some Kind of Force Field allows you to save your CGI budget for more attractive spacecraft. See also Deflector Shields and Force Field Door. The primary difference is that those tropes refer to the barriers, whereas this trope refers to the scene where someone is required to walk up and experimentally poke it a few times while reciting the required phrase (as above).

Examples of Some Kind of Force Field include: