Something About a Rose 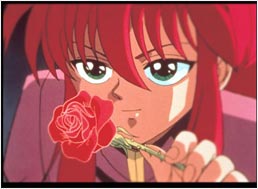 And I envy the rose
That you held in your teeth, love,
With the thorns underneath, love,
Sticking into your gums.

What accessory could you possibly add to up your sex appeal 20 notches, show your sensitive side, and look really cool? A rose, of course! It's a flower, so it's beautiful and romantic like you, but it has thorns, and you're no wuss. Hold it between your teeth, if you want to up your sex appeal a few more notches. Perfect! And in some cases, it can be weaponized into a Whip It Good and/or petal storm!

Generally, this is used to indicate a character is Bishonen, a girly but badass man, (Casanova-like) or a vamp.

Compare and Contrast The Tragic Rose.

Examples of Something About a Rose include:

Baku: There he goes again, making flowers appear out of thin air!

Alistair: Here, look at this. Do you know what this is?
Warden: Your new weapon of choice?
Alistair: (jocular) Yes, that's right! Watch as I thrash our enemies with the mighty power of floral arrangements! Feel my thorns, darkspawn! I will overpower you with my rosy scent! (Sniff, sigh)...or, you know, it could just be a rose...

"Env[ies] the rose
That you held in your teeth, love
With the thorns underneath, love
Digging into your gums"

A rose that shines down from above
I signed and sealed these words in blood
I heard them once, sung in a song
It played again and we sang along
You'll always be there with me
Even if you're gone
You'll always have my love
Our memory will live on

Some may be from showing up
Others are from growing up
Sometimes I was so messed up and didn't have a clue
I ain't winning no one over
I wear it just for you
I've got your name written here
In a rose tattoo.