Everything About Fiction You Never Wanted to Know.
Jump to navigation Jump to search
/wiki/Sonata Arcticacreator 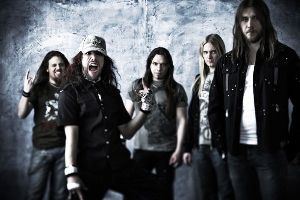 A progressive Power Metal band from Finland formed in 1996. They were originally called Tricky Beans and played hard rock. In 1997, they changed their name to Tricky Means, clearly a drastic change. Then they moved on to traditional fast power metal in the style of bands like Stratovarius, and recorded Ecliptica. "Tricky Means" did not seem like an appropriate name for a power metal band, so they changed their name to Sonata Arctica.

Eventually, Mikko Harkin joined as the keyboardist, bassist Janne Kivilahti left, and ex-guitarist Marko Paasikoski came back to play bass. Silence was released. In 2002, Mikko left, and Winterheart's Guild was recorded with the help of Jens Johansson from Stratovarius. The band narrowed their search for a new keyboardist down to two potential members, and spent some time getting both of them drunk to see how they would get along with the band. Henrik Klingenberg passed the test. In 2004, Reckoning Night was released; it had some progressive influences, and if this was a novel, I'd call that foreshadowing. But, to get on with the story, a live DVD, For the Sake of Revenge, was recorded in Japan in 2005.

In 2006, the band found they had a problem: Jani still hadn't finished his civil service, which is mandatory in Finland, and couldn't leave the country, so Elias Viljanen replaced him for the tour. As if this didn't annoy the fans enough, Sonata Arctica decided they were completely and utterly bored of power metal. Unia came out in 2007, and was a rather sudden switch to progressive metal. Some fans loved it, some hated it. Elias permanently replaced Jani as the guitarist shortly after. In 2009, The Days of Grays came out, and got reactions as mixed as Unia did. Another live DVD was recorded in April of 2011 in Oulu, Finland, and released later that year. In May 2012, the band released Stones Grow Her Name, and has once again drawn sharply polarized reactions from fans and critics.

An Action-RPG named Winterheart's Guild based on the band is being developed by Zelian Games. It's currently in Development Hell due to Zelian Games concentrating more on xOrbic, which will form the foundation of the Winterheart's Guild game. No release date has been announced as of yet, but a playable demo was shown at E3 2007. The band members themselves will be the player characters and the game's soundtrack will be provided by the band. It is confirmed that the game will contain at least one new, unreleased Sonata Arctica song.

Just remember: 1. Wolves, not dragons. 2. The lyrics are not personal stories. Not even those that really really sound like they are.

"You are one with your foe."

Why should I be there for you!? Fuck off and get a life!!!