Everything About Fiction You Never Wanted to Know.
(Redirected from Sonic CD)
Jump to navigation Jump to search 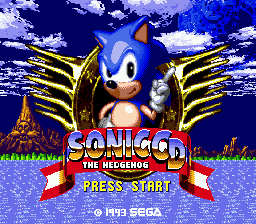 "To live a life of power, you must have faith that what you believe is right, even if others tell you you're wrong. The first thing you must do to live a life of power is to find courage. You must be ready to reach beyond the boundaries of Time itself. And to do that, all you need is the will to take that first step..."
—Words taken from Japanese Cover of Sonic CD.

Released in 1993, Sonic CD was one of the better games that could be found on the Sega CD, an ambitious Sega Genesis add-on marred by its price tag and an over-saturation of "FMV games". Fortunately, it saw a re-release on the PC three years later, then another in 2005's Sonic Gems Collection. Considered by many to be one of the best Sonic the Hedgehog platformers thanks to the time travel elements and complex level designs providing much replay value. This game introduced Amy Rose--Sonic's cute Stalker with a Crush--and fan favorite Metal Sonic. It also had an Anime opening and ending sequences with Sonic displaying his badassery: two of the few FMV's on the console to actually look good.

The story begins with Amy meeting Sonic, having used tarot cards to seek him out. When Amy inquires where he's going, Sonic says he's going to Never Lake, explaining that it's that time of the year when the Little Planet appears over the lake. Thanks in part to the seven Time Stones, the Little Planet does not abide by the passage of time familiar to Earthlings Mobians inhabitants of their world, making Time Travel possible should one reach high enough speeds on the planet's surface. Being the lightning-quick, risk taking daredevil he is, Sonic is looking forward to visiting the Little Planet to see if he's fast enough to break the world's time barriers.

After arriving at Never Lake, the two hedgehogs notice something amiss. The Little Planet was there, but it has been chained to a mountain and its surface covered in metal. Arriving on the planet's surface, Sonic and Amy investigate, but soon Amy is captured by a figure that quickly flies away. In his search for Amy, Sonic encounters Dr. Ivo "Eggman" Robotnik, the Mad Scientist he had defeated before.

Robotnik and his loyal Badniks are in the process of transforming the entire Little Planet into his own dystopian fortress, and once he collects the Time Stones, taking over the world will be a breeze. That is, after killing Sonic first. When Robotnik discovered that Sonic had arrived on the Little Planet, he sent Metal Sonic--a robot painstakingly modeled after its namesake--to kidnap Amy and lure Sonic. With Sonic taking the bait, Robotnik hopes to destroy his arch-enemy. Determined as usual, Sonic must collect the Time Stones, defeat Metal Sonic, rescue Amy and liberate the Little Planet from Robotnik's tyranny.

Time Travel is the main gimmick of the game. The first two zones in each level have "Past" and "Future" signs, and after hitting one of the signs and gaining enough speed, you'll either travel to the past or to the future. By default, the future is always a bad one, a desolate wasteland with worn down technology that ruined the environment. By destroying the Badnik generator in the past, the zone's future automatically becomes a good one, with all advances in technology actually working to the environment's benefit, and the Badniks in all three periods are automatically destroyed. The boss fight in each level is in zone three and takes place in the future, and if you've destroyed the generators in the two previous zones, the future is an automatic good one. However, if you go to the Special Stages and collect all seven Time Stones, all of the levels will automatically have good futures.

In addition to the Spindash, the blue hedgehog can do the Super Peel Out, a technique that sends Sonic dashing off with super speed. The difference between the two is that Super Peel Out gives Sonic a greater burst of speed but leaves him vulnerable to enemy fire and collisions. The Spindash operates very differently than in subsequent games, probably because it was in its preliminary stages before Sonic the Hedgehog 2. It has to be "revved up" for several seconds before use.

And because of being the first in development, Sonic CD is often considered to be an in-between game, following the events of the first, but taking place before the second; this is also backed up by the absence of Tails, who shows up in a secret picture with the caption "See you next game!", referring to Sonic the Hedgehog 2.[1]

The game was ported to the PC in 1996, and was later included in the Sonic Gems Collection in 2005 for the PlayStation 2 and Game Cube.

Sonic CD was remade[2] in 2011, for the Xbox 360 (through Xbox Live Arcade), Play Station 3 (through the Playstation Network), PC (through digital distribution, primarily Steam), iPhone, iPod Touch, iPad, Android and Windows Phone 7 in HD with proper Widescreen support. It marks first time the Japanese soundtrack is officially available in the United States. It was also developed by Christian "The Taxman" Whitehead. It was actually in the works for a while.

The remake features Tails as a playable character. Also featured is an option to select either the Japanese or US soundtrack.

The war began. Earth trembled in fear. Bald, brainy, and cold-hearted. The distance grows closer, little by little. Wow! The power he possesses is incredible! He doesn't stand a chance!