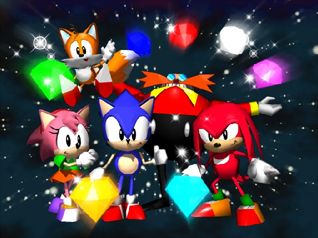 Thank you for playing!

"Everybody's Super Sonic Racing, try to keep your feet right on the ground..."

Sonic R is a racing game from the Sonic the Hedgehog franchise released in 1997 for the Sega Saturn and later for the PC. In 2005 it was re-released on the Game Cube and PlayStation 2 as part of Sonic Gems Collection, which featured the PC version of the game. It was also made available for download on GameTap for a short time in 2007.

Known for its power pop musical track by Richard Jaques and songs performed by T.J Davis. Notable in the fact that the PC and Saturn versions of the game could be played in any standard CD Player, in case you wanted to listen to the music without having to play the actual game.

Tropes used in Sonic R include:
Retrieved from "https://allthetropes.org/w/index.php?title=Sonic_R&oldid=1764605"
Categories: