Everything About Fiction You Never Wanted to Know.
< Sonic the Hedgehog‎ | Characters
Jump to navigation Jump to search

These characters are allies to Sonic, but they usually don't have the same central role that Tails and Knuckles do.

A bit more loose as a group than the other teams, they have only had two constant members: Amy and Cream. Their muscle alternates between each of their appearances. In Sonic Heroes, it was Big. In Sonic Free Riders, it was Vector. In the non-game-Canon comic Sonic Universe, it was Blaze.

"I know that people fight over the most trivial things. Some people may be selfish, like the professor said... but they're basically good, if they try their best and never give up on their wishes. They always have a reason to be happy; that's why you should help them out."

An energetic pink hedgehog whom Sonic rescued back in Sonic CD. Initially she was a fan of Sonic's who she desperately wanted to meet, but their meeting was soon cut short with the arrival of Dr. Eggman and his new creation, Metal Sonic. Metal kidnapped Amy and Sonic had to save her and stop Eggman's plan of using Little Planet to mess with the timeline. After Eggman's defeat, Amy fell completely in love with Sonic and has made numerous attempts to start a relationship with him, often getting mixed up in his adventures as a result, much to his chagrin.

Amy has a very sweet and understanding personality. She always tries her best to understand and see the best in people and help them in any way she can and is very protective of her friends. Underneath her sweetness lies quite the temper however, something that even Sonic isn't immune to being on the receiving end of.

Amy (when running into Shadow): "Oh Sonic, I thought I'd never see you again. I'm so glad you made it!"

Amy (when running into Silver): Now I've got you Sonic!"
Silver: "Hey!"
Amy: "It's about time I finally caught you again!"

Amy (when running into Sonic in his Werehog form): "Found you, Sonic! Aww, Sonic! I've been looking for you forever!"
Sonic: "H-hey, lemme go!"
Amy: "Heh heh, you're crazy if you think you can get away from Amy Rose, and..."

"A friend of a friend is always a friend!"

A very young rabbit who is overly polite, and whose best friend is a Chao named Cheese. She is the only character with a visible family member in the games who isn't dead: a loving, caring mother named Vanilla. And she has another Chao, named Chocola.

"Froggy! Where are you?"

Very large purple cat who lives in the forest with his best friend, a frog named Froggy. He primary trait is his strength that rivals that of Knuckles. His true motives are that frog, unless you are playing Chronicles... 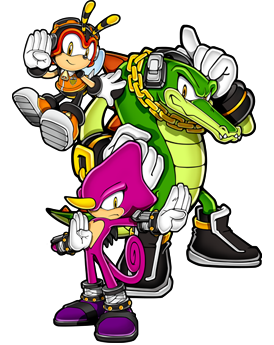 First appeared in Knuckles Chaotix, where they team up with Knuckles to foil one of Robotnik's plans. Consists of Vector the Crocodile, a music lover with a Brooklyn accent; Espio the Chameleon, a Ninja warrior with powers of invisibility; hyperactive kid Charmy Bee; the pacifistic Mighty the Armadillo (one time member of the group); and robots Heavy and Bomb. Dropped off the radar until Sonic Heroes, where Vector, Espio, and Charmy run a detective agency (Mighty, Heavy, and Bomb are still AWOL). The Archie comics have developed the Chaotix into Knuckles's supporting Five-Man Band and added new members.

Tropes applying to Mighty don't appear here; he has his own section below.

GUN Commander: "Vector the Crocodile and Team Chaotix have volunteered to scout for further clues. They're on the channel now."

Vector: "Yo, Sonic. It's about time you came back."

A fire-wielding cat from, ah, someplace else. Guardian of the Sol Emeralds.

"I will protect the future!"

A telekinetic hedgehog from either the future or Blaze's dimension.

Silver: I can't deflect lasers with my telekinesis.

Silver: (having just arrived in the present, separated from Blaze) Blaze? Blaze! *looks around for a few moments* Now I must fight for the future!

"The servers are the seven Chaos. Chaos is power... Power enriched by the heart. The controller is the one that unifies the Chaos."

A mysterious girl from the distant past with a connection to Chaos.

An ancient robot called a Gizoid that can learn to copy the traits and skills of others; Emerl is a unique model that can also absorb Chaos energies. Said to have wiped out the civilization that made him. However, he picks up better traits by hanging out with Sonic and his friends -- but has to be destroyed once his old programming kicks in.

Only appears in Sonic Battle, but has been referred to since. Sonic Advance 3 has Robotnik build his own Gizoid, Gemerl, that can merge with machines. Sonic Chronicles later explains that he and the rest of the Gizoids were made by the Nocturnus clan of echidnas.

"We give thanks for the blessed flames. May we always continue to have peace. Sun of Soleanna, guide and watch over us with your eternal light..."

The Princess of Soleanna who appeared as Sonic's human love interest (though the attraction is pretty much one-sided on Elise's part) in |Sonic the Hedgehog 2006.

"How dare they call this culinary concoction food? Look here, do you see this sorry excuse for a sandwich? The bread should be no less than 3/4 of an inch thick. Upon it, one tablespoon of mayonnaise and a pinch of black pepper. The contents FRESH cucumber sliced THINLY if you please! Am I quite right, Tails?"

A well known professor from Spagonia. His knowledge helps Sonic over the course of the story.

"I don't have what it takes. I don't think I can do all this adventuring on my own. But I'm not going to give up. I need to keep trying harder and harder until I can do it!"

An excitable and hyperactive young raccoon from Blaze's dimension who dreams of having epic adventures.

Blaze: Since you don't seem to understand what we're getting at, I'll just say it: You're a nuisance! 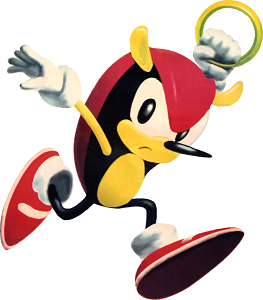 One of the more obscure Sonic characters, Mighty the Armadillo is an old friend of Sonic the Hedgehog. He is similar in speed to Sonic, but is apparently stronger, hence his name. He has made two appearances: 1993's Sega Sonic the Hedgehog Arcade game, and Knuckles Chaotix in 1995. He has not appeared since, save for a nod to him via a missing poster in Sonic Generations. With that said, he has made infrequent appearances in the Archie Sonic comic series. 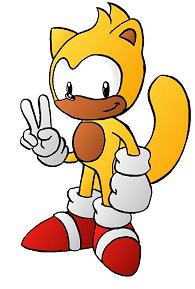 Another of Sonic's early friends. Like with Mighty, he has been missing from the franchise ever since his sole game appearance in 1993, save for a nod to him in Sonic Generations. He has made infrequent appearances in the Archie Sonic comics, fortunately.