Everything About Fiction You Never Wanted to Know.
Jump to navigation Jump to search
/wiki/Sonny Straitcreator 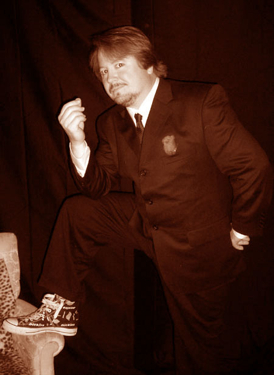 "I listen and I always imagine the Japanese guy throwing down the gauntlet and saying 'Take that American voice actor!'"
—Sonny Strait during One Piece audio commentaries

Sonny is an American comic artist and voice actor (mainly anime related). He is best known as Krillin from Dragon Ball; the first voice of Toonami's mascot, TOM; Maes Hughes from Fullmetal Alchemist; and the current voice of Usopp from One Piece.

He and his friend William (Bill) Foster made a comic called Muff Dyver and the Sex Gophers From Hell and, after being noticed by some local celebrities in the small college town Denton, Texas, they went on to make more such as The Atomic Punk and Mr. Average.

His first voice audition was as Krillin (from the hit anime series Dragon Ball). He mainly works with FUNimation.

Besides his voice acting career, Sonny has also penciled several comic strips as well as two stories for the Elf Quest series.

Sonny is currently under contract to publish a manga titled We Shadows with Tokyopop. The first volume debuted in August 2007 and was nominated shortly after for YALSA's Great Graphic Novels for Teens list in 2008.

His most recent work is an online comic, Car Bombs. He and his wife also sing in a cover band called White Girl.