Everything About Fiction You Never Wanted to Know.
(Redirected from Sora wo Kakeru Shoujo)
Jump to navigation Jump to search 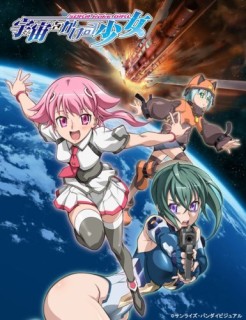 As the Earth became unable to sustain ten billion people, humanity took action. They built a giant space colony that orbits close to the Earth, and apparently took a Raygun Gothic design style along with them. There are five main points along this space station, each one hosting a group of countries, and an Orbital Union oversees it all.

The year is Orbital Era 311. In the cluster of space colonies (or "Structure") called Kirkwood, located at the fifth Lagrangian point, 17-year old plucky Akiha Shishido is entering into an Arranged Marriage. She'd be the first one in her family to marry, but she's still in school and wants nothing to do with it. She and her little assistant, Imoko, get out of the way and end up walking into an abandoned space colony run by sentient AI Leopard, who's firmly on the side of crazy. At the same time, a mysterious girl named Honoka awakens and begins leading Akiha into more than she planned. Inter Colony Police member Itsuki Kannagi is also watching the events...

Animated by Sunrise, the show is done by the same creative team behind My-HiME, Mai-Otome and Idolmaster: Xenoglossia.

The title is a reference to the similarly named The Girl Who Leapt Through Time.