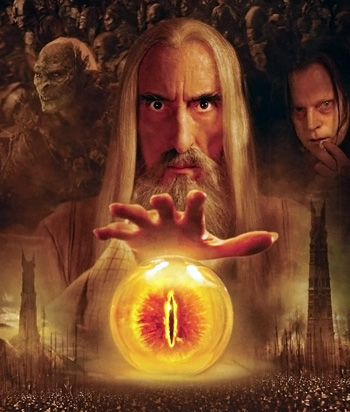 Take an Evil Sorcerer, mix with Evil Overlord, place against one incredibly physical and muscular protagonist and leave to stew in a realm of crows, palantirs and monstrous minions.

The Sorcerous Overlord is probably one of the most common variations of Evil Sorcerer due to the strong themes that come out of having a single hero or small Ragtag Bunch of Misfits against a ruler whose power comes from a vague, nebulous and potentially ever-pervasive source. The Sorcerous Overlord can always have a number of devices to keep inserting their presence into the plot: Magic Mirrors, evil animal minions, setting up magical warriors. Every element of the overlord's realm can be a more direct extension of themselves (with inherent Exclusively Evil) and they can come up with various ways of sending a threat against them. They also make good foils for the musclebound hero who fights through mainly physical stabbing-meaty-things-with-pointy-things methods. On the other hand, this can make it hard to explain why there are any limits on the sorcery when fighting the hero.

Examples of Sorcerous Overlord include:

Retrieved from "https://allthetropes.org/w/index.php?title=Sorcerous_Overlord&oldid=1603656"
Categories:
Cookies help us deliver our services. By using our services, you agree to our use of cookies.