Left the Background Music On

Everything About Fiction You Never Wanted to Know.
(Redirected from Sorry I Left the BGM On)
Jump to navigation Jump to search 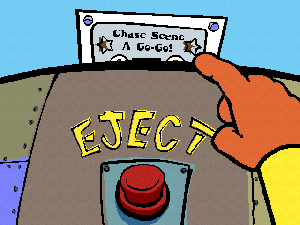 "Chase Scene A Go-Go?" Whoever owns this truck has great tastes in music.

Meta-joke wherein the background music builds to a dramatic pace, and one of the characters suddenly turns around and complains about the loud music - revealing that what you thought was part of the soundtrack was music actually playing in the show. Bonus points if a second character apologetically turns the music off. A humorous variation of Source Music (which is the technical term for "it's actually in the scene").

Compare Theme Tune Cameo, for when the show's theme tune is performed within the show. Contrast Medium Awareness, for when a character is actually hearing the soundtrack. Can be used with almost all Mood Motifs. The inversion is Diegetic Switch, when the music goes from in-universe to soundtrack.

Examples of Left the Background Music On include:

When the villain goes into her Freudian Excuse flashback, Sarah pulls out a violin and plays the flashback music herself.