Everything About Fiction You Never Wanted to Know.
(Redirected from Soul Nomad and The World Eaters)
Jump to navigation Jump to search 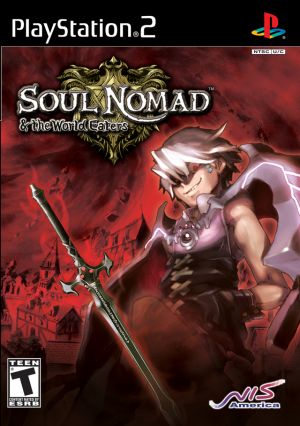 A 2007 strategy RPG title brought to you by the good people at Nippon Ichi Software. It's a Darker and Edgier take on their usual formula, and could best be described as 'Ogre Battle on a power trip'.

Soul Nomad is set upon the island continent of Prodesto, in the world of Haephnes. Two centuries ago, Prodesto was united under the hero Lord Median The Conqueror, and prosperity reigned for a time. Though Median's reign would be cut short by a pandemic that claimed both himself and his son, his daughter Layna soon emerged as a worthy successor to Prodesto's throne.

Unfortunately, a mere fifty years later, Prodesto would become the landing spot of an evil god of death known as Gig. With the aid of his "pets", titanic golems known as "World Eaters" (no not THOSE "World Eaters", he grinded Prodesto into the dirt, slaughtering most of the population and scorching the landscape into a barren wasteland.

When all hope appeared lost, Layna appeared before Gig and defeated him in single combat. Without their master, the World Eaters fell dormant. However, the scars of their rampage remained etched into the land, and Prodesto continued to decay, with the birth rate falling and crops growing more poorly with each passing year. All the while, the frozen World Eaters towered over the populace, a constant remainder of the terrible power that could reawaken at any time.

Two centuries later, a young warrior (named Revya by default) and their childhood friend Danette are preparing to become official guardians of their village, one of the last bastions of human civilisation left in Prodesto. On the day of their appointment, they are gifted two weapons by village elder Layna: Danette receives a pair of magic kukri, while Revya is given a black onyx sword.

Upon grasping the handle, the onyx sword is suddenly revealed to be the resting place of Gig himself, who immediately attempts to possess Revya's body and resume his reign of destruction. His possession is foiled by Layna, so Gig makes a deal: he will grant Revya a tiny sliver of his godlike power in exchange for being allowed to share Revya's body as a "soulmate". However, the second that Revya overuses this power, Gig will use the foothold in Revya's soul to seize complete control.

Strengthened with Gig's dark powers, Revya is sent out into Prodesto along with Danette to destroy the dormant World Eaters and Save the World. Hilarity Ensues.

Soul Nomad is also known for an infamous Villain Protagonist campaign called the "Demon Path". In this alternative storyline, Revya decides that it would be a better idea to use the awesome destructive powers of an evil god to do whatever the hell they want, and with the gleeful encouragement of Gig, starts down a path to ultimate power as the tyrannical "Devourlord". Then it gets worse. Much worse.

Tropes used in Soul Nomad & the World Eaters include:
Retrieved from "https://allthetropes.org/w/index.php?title=Soul_Nomad_%26_the_World_Eaters&oldid=1853232"
Categories:
Cookies help us deliver our services. By using our services, you agree to our use of cookies.