Everything About Fiction You Never Wanted to Know.
Jump to navigation Jump to search
/wiki/Soundgardencreator 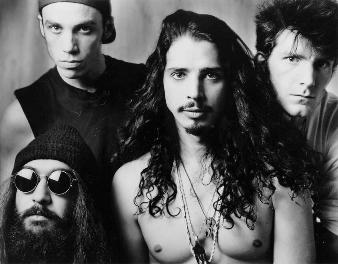 Soundgarden is a Seattle Grunge/Alternative Metal band formed in The Eighties and popular in The Nineties. Their name comes from a sculpture in Seattle, "A Sound Garden". The band was recognized as one of The Big Four of Grunge (along with Nirvana, Pearl Jam and Alice in Chains), though they didn't become successful until the genre fully took off with the release of Nirvana's Nevermind and Pearl Jam's Ten. Their 1994 album Superunknown is considered a masterpiece of the movement.

The group broke up in 1997 due to internal conflict, leaving Cornell to form the Supergroup Audioslave with the former members of Rage Against the Machine, and later a solo career with polarizing results. Cornell also co-wrote You Know My Name with David Arnold for the James Bond film Casino Royale. He's also headed in a more pop/hip-hop-oriented direction recently, causing much backlash among the fanbase. Cameron currently drums for Pearl Jam, and has since the Yield tour (he wasn't involved with the Temple of the Dog reunion mentioned below). Thayil played with Jello Biafra and Krist Novoselic as the "No WTO Combo" after the Seattle riots of November 1999, and has contributed to Dave Grohl (ex-Nirvana, current Foo Fighters)'s side-project Probot.

Rumours of a possible reunion are circulating after the band appeared together for the first time in years at Pearl Jam's 4-Night Stand performance (this was also the first Temple of the Dog reunion in years when Cornell joined Pearl Jam on-stage to perform "Hunger Strike").

On January 2010, Cornell officially announced through his website that "The Knights of the Sound Table ride again".[1] They released the album King Animal in 2012 and have played concerts throughout the years, from 2010 to 2017.

On May 17, 2017, after performing a concert in Detroit with the band, Chris Cornell ended his life.

Cornell: With Ultramega OK we really liked the songs on that record but we were disappointed in the production.