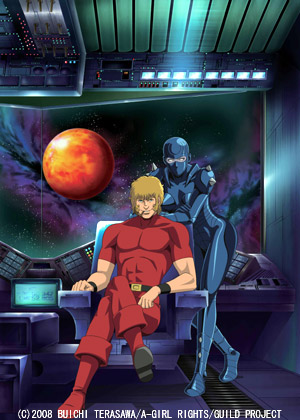 Imagine a book about space adventures from The Eighties. The Stainless Steel Rat by Harry Harrison would fit the best. Make the overall tone a bit Darker and Edgier, slightly increase the amount of naked female body, keep the funny level the same and give the main character an Arm Cannon. Make it all into manga and anime adaptation. Give it an awesome, very Eighties female vocal opening and ending.

Here you have it -- Space Adventure Cobra. A Space Opera manga by Buichi Terasawa published between 1978 and 1984, and later adapted to anime format and feature-length film.

Two anime adaptations were made, both closely watched by author of the original manga and preserving both plot and style of the original. What is even more awesome, in a recent remake titled Cobra the Animation they even recruited the same seyuus for both Cobra and Lady Armoroid. Preserving the character design helped a lot too.

Tropes used in Space Adventure Cobra include:
Retrieved from "https://allthetropes.org/w/index.php?title=Space_Adventure_Cobra&oldid=1833030"
Categories:
Cookies help us deliver our services. By using our services, you agree to our use of cookies.