Space Does Not Work That Way 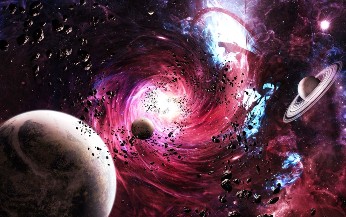 Because... you know... space is grape-flavored.

Thanks largely to Speculative Fiction, space is probably one of the most inaccurately portrayed things in modern media, to the extent that complete falsehoods are widely accepted as fact.

This is a very specific kind of Did Not Do the Research, which may have been partially justified in earlier media as the research back then wasn't up to much. Modern portrayals of space, however, still haven't changed much from the rock-filled, noisy place which will make an unprotected human instantly explode into clouds of ice.

Some of this is due to a lack of research or just lack of interest. But most of the modern misrepresentations can be put down to the Rule of Cool (the idea that things with sound are cooler, or at least not as scary, as a famous tagline pointed out, as things without), artistic license, or simply the belief that audiences wouldn't accept it any other way.

Specific kinds of Space Does Not Work That Way include:
Retrieved from "https://allthetropes.org/w/index.php?title=Space_Does_Not_Work_That_Way&oldid=1823853"
Categories:
Cookies help us deliver our services. By using our services, you agree to our use of cookies.