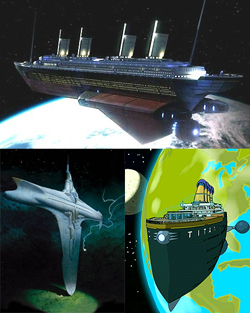 Not the regular Titanic, but three of the several spaceship ones.

As has been established, Space Is an Ocean, and in fiction, naval and maritime terms are often applied to spaceships. Some works, however, take things further, and make their characters go Space Sailing on literal ships IN SPACE! The reason for this? The Rule of Cool, and nothing else.

While, in Real Life, there are proposals for spacecraft with solar sails, this isn't Truth in Television, because they'd still be just spacecraft-with-sails; these are literal boats in space, with all the shape and features that implies.

A subtrope of this is the idea of a space Titanic, an oddly common meme. They are invariably doomed.

Interestingly, Space Ships don't go after Space Whales as often as you might think. They are quite likely to house Space Pirates, though.

Examples of Space Sailing include: